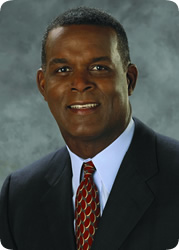 This morning’s USA Today features advice from Darden Restaurants CEO Clarence Otis on surviving the recession. The head overseer of Olive Garden and Red Lobster had some interesting things to say about pinching pennies, but nothing about how he made the jump from Big Law to the big time.  For that we go to JRank.

Clarence Otis’s case was a high-school standout who won admission and a scholarship to prestigious Williams College in Massachusetts after being encouraged to apply by Los Angeles lawyer Felix Grossman.

Otis’s scholastic record at Williams was likewise a distinguished one. He graduated magna cum laude in 1977 with dual majors in economics and political science, receiving the school’s Political Science Writing Prize and Phi Beta Kappa recognition in his senior year. Otis moved on to Stanford University Law School in California, earning his law degree in 1980. For four years in the early 1980s, Otis worked in the field of corporate law, specializing in the fields of securities law and mergers and acquisitions. He started out with the firm Donovan Leisure Newton & Irvine and moved on to Gordon, Hurwitz, Butowsky, Weitzen, Shalov & Wein. From the start he ran with a high-flying crowd; one of his clients was famed financier Carl Icahn. Otis and his wife Jacqueline Bradley were married in 1983 and have raised three children. Bradley later became board director of the Greater Orlando Aviation Authority.

But, he told Jerry W. Jackson of theOrlando Sentinel, “I thought the finance side was more exciting than the law, so I moved to an investment banking firm”—Kidder, Peabody & Company. The barely 30-year-old Otis became a vice president at First Boston Corporation in 1987.