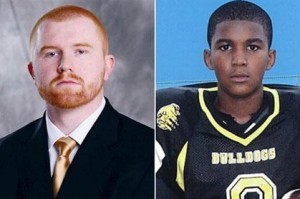 He describes himself as “Super Irish” but Kevin Cunningham should perhaps be better known as an “unapologetic advocate.”

The former Howard University School of Law student started the Change.org petition which helped prompt calls for the prosecution of George Zimmerman, the man who shot and killed 17-year-old Trayvon Martin inside a gated community in Sanford, Florida. That petition was heavily circulated online and helped galvanize support for the Martin family and draw media attention to the case.

Cunningham, a red-head who describes himself as the “super Irish” son of activist parents, said he learned about the Martin case when he read a story posted on a listserv for Men of Howard, an informal, secretive fraternity that he joined while attending the historically black Howard University as a law student.

When he suggested starting an online appeal calling for prosecution of the shooter, neighborhood watch volunteer George Zimmerman, the proposal was met with both support and skepticism from other subscribers.

“At Howard, they tell us as soon as we get there, ‘If you’re going to be a lawyer, you’re either a social engineer or a parasite on society.’ … that’s how I think about life, is to be a social engineer, and that’s what my parents always were trying to be,” he said.

In the history of the university’s law school reads a fuller statement.

Most importantly, Howard School of Law is dedicated to producing “social engineers.” As stated by Charles Hamilton Houston, “A lawyer’s either a social engineer or … a parasite on society … A social engineer [is] a highly skilled, perceptive, sensitive lawyer who [understands] the Constitution of the United States and [knows] how to explore its uses in the solving of problems of local communities and in bettering conditions of the underprivileged citizens.”