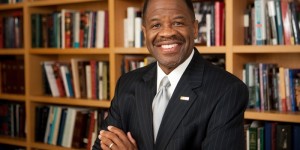 Blake Morant has been named the next dean of The George Washington University School of Law.

In the university announcement of his appointment GW President Steven Knapp said, “Blake Morant is not only a seasoned dean but also a national leader in legal education. He brings to this important position a proven record of accomplishments, and his extensive leadership experience will make him an extremely valuable addition to our law school and the entire university.”

His experience as a law school administrator has earned him the respect of peers nationwide. He is currently the President-Elect of The Association of American Law Schools the organization which represents 176 law schools representing and thousands of law school faculty members.

Morant earned a bachelor’s degree in Rhetoric and Communication and his law degree from the University of Virginia.

When Morant assumes his new role he will take over from interim dean Gregroy Maggs. Maggs’ appointment was not without controversy. Back in 2012 GW Law Professor W. Burlette Carter alleged racial bias in the decision to overlook the law school’s Senior Associate Dean Christopher Bracey for the interim dean’s position.