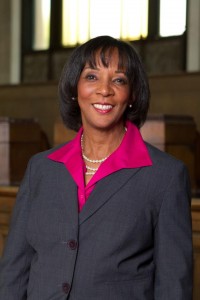 Jackie Lacey is months away from potentially making history if she is elected The District Attorney of Los Angeles County, California. Victory on Nov. 6 would make her the first woman and the first African-American to be the county’s top prosecutor.

For Lacey the race isn’t just about making history, but it’s more about taking what she views as the natural next step in a career, which has spanned nearly three decades. Of her 26 years in the D.A.’s office she says she spent “half of that in the trenches, and half of that in management learning the business side of law.”

She announced her candidacy in June of 2011 and in June of this year garnered 31.83% of the vote to her nearest opponents 23.74 % setting the stage for the November runoff. It’s also notable that two of the other candidates in the race Danette Meyers and Bobby Grace are also African-American.

“There have been 41 district attorneys and as far as I can see when you look at the portraits there are no women, and there have been no people of color,” Lacey said noting the story told by the photo gallery on the D.A.’s website showing all of men who have held the post.

As a career public servant Lacey says she understands the meaningful role a prosecutor plays. She also understands the significance of an African-American standing behind the prosecutor’s table, as opposed to the defense table.

“African-Americans, minorities in general are overrepresented on the other side of the criminal justice system,” she said and though prosecutors represent their state or in the case of federal prosecutors, the United States, there is an even more noble interest represented.  “Our role is to make sure  justice is fair.”

“There’s a perception that the criminal justice system is not fair for minorities or women. So, the more women and people of color people see the better.”

In the courtroom Lacey has herself prosecuted dozens of cases including major felony cases such as murder cases and sex abuse cases.

Now as a manager she says she sees a diverse group of attorneys beginning their careers as prosecutors.

When asked what she might tell a law student or recent graduate considering a career as a prosecutor Lacey responded, “What they should know is that in the DA’s office we offer young lawyers an opportunity to assume more responsibility in the courtroom. Our lawyers have a great deal of job satisfaction. Our population of 1,000 lawyers is one of the most diverse. We are family friendly. We offer a wide variety of specialties.”

As a wife and mother who worked her way up Lacey now credits her family’s support with giving the confidence to run her race, and be sure she can be the type of leader she aspires to be.

The challenges if elected will be many for Lacey, and one of the most daunting might be dealing with the state’s plan for “realignment.” In late 2011 California, home to the country’s largest prison system,  began drastic reform, which shifted responsibility back to the local counties for managing lower-level offers, supervising parole and probation, and providing critical other services such as substance abuse and mental health.

Lacey says this new reality means that law enforcement must be collaborative in their approach to rehabilitating offenders so that they don’t continue to commit crimes.

She also hopes that as D.A. she’ll be an inspirational leader, one with high standards, who remains engaged.

“I want to brand leaders. Leading people is a difficult job and as the elected leader I expect my leaders to mentor their lawyers, and support them.”

“People should never underestimate the impact they are having on people on an everyday basis.”