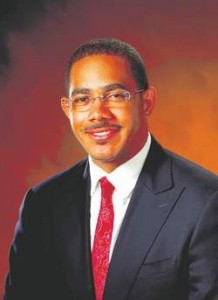 The National Bar Association awarded Gainesville attorney, Christopher Chestnut , the Best Advocate of the Year award as part of the first 40 Lawyers Under 40 Awards held recently at the NBA convention in New Orleans.

After being nominated, Chestnut won Best Advocate by receiving the highest number of votes from an NBA online poll that totaled nearly 250,000 votes.  What makes Chestnut such a winner?

Chestnut, 30, is founder of the Chestnut Law Firm, which in four years has grown to a multimillion-dollar firm with a staff of 18 and offices in Gainesville, Jacksonville and Miami. The firm participated in the $800 million class-action lawsuit against tobacco companies and represents clients throughout the country in a multimillion-dollar lawsuit against the pharmaceutical Avandia.

The Florida State University and the University of Florida Levin College of Law graduate is obviously a smart, focus and passionate man.  He was picked mentors wisely–among them is OBABL fav Willie Gary.

Chestnut credited Stephan Mickle, the first black judge in the 8th Circuit and U.S. Northern District of Florida, and Alachua County Judge Walter Green as “phenomenal role models.” He also credited the lawyers and judges of the entire 8th Circuit for creating an environment of legal excellence.

Chestnut was mentored by Stuart lawyer Willie Gary. He grew up working in his family’s Gainesville funeral home and is the son of Charles Chestnut III, owner of the funeral home, and Alachua County Commissioner Cynthia Moore Chestnut.