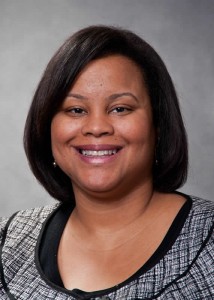 Danielle R. Holley-Walker has been named the new dean of Howard University School of Law.

“I am honored to be appointed Dean of Howard University School of Law. Howard’s law school will build on its legacy by continuing to produce lawyers that are transformative leaders. The future of Howard’s law school is to provide cutting edge legal education to students who will help define the social justice agenda for the 21st century, and who will boldly lead in the public and private sectors. I am excited to join the Howard family, and I look forward to working closely with faculty, students, staff, and alumni,” said Holley-Walker told On Being A Black Lawyer.

In an interview on the South Carolina website Holley-Walker discusses what piqued her interest in law and social justice. Those images included a portrait of the late Supreme Court Justice Thurgood Marshall which she saw while visiting the office of her law professor dad, seeing the Clair Huxtable character on The Cosby Show and watching the testimony of Professor Anita Hill during the confirmation hearings for Supreme Court Justice Clarence Thomas.

Holley-Walker went on to earn a bachelor’s of arts degree in history from Yale University, where her thesis was “The Social Engineers: Charles Hamilton Houston and Howard Law School 1929-1935.” She earned her law degree from Harvard Law School. She later clerked for now Chief Judge Carl Stewart on the United States Court of Appeals For The Fifth Circuit.

As The National Law Journal points out Holley-Walker will follow a family tradition when she takes on her new deanship. Holley-Walker’s father is himself a law school dean. Dannye Holley is the Dean of Texas Southern University’s Thurgood Marshall School of Law which he has led since 2009. She credits her dad with being a role model, but her entire family with being supportive of her development and career.

“My parents have always been the people I look up to most. My brothers and I spent a lot of time during our childhood at Thurgood Marshall School of Law with my dad. I loved that atmosphere. The comraderie of the faculty, students, and staff. That is one thing that strongly attracted me to the Howard job. From a fairly early age I wanted to be law professor, and now to follow in my dad’s footsteps as a Dean is very special.”