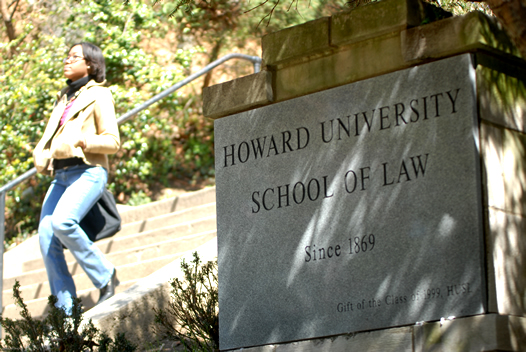 Almost 200 students and professors filled the Moot Court Room at Howard University School of Law on January 29, 2013 to experience District of Columbia Court of Appeals proceedings. Chief Judge Eric T. Washington had the idea a couple of years ago to “take the Court on the road.” For two years the Court has been visiting law schools in the DC area to give area law students an on-campus experience of viewing actual oral arguments. Okianer Christian Dark, Interim Dean of the law school, commenced the occasion by introducing the Court and the Judges. She explained that the DC Court of Appeals is the busiest in the nation, presiding over appeals arriving from the DC Superior Court and federal agencies. Last year, the Court heard about 1,761 dispositions.

Three judges presided over that morning’s oral arguments. Judge John Fisher is a native of Knox County Ohio, served in the military and then attended Harvard Law School where he received his law degree, cum laude, in 1974. In 2005, he was appointed to the DC Court of Appeals. Judge Anna Blackburne-Rigsby, born in New York City and raised in Washington, DC, is a Howard University School of Law alumna appointed to the Court in 2006. The third, Judge Phyllis Thompson, as a native Washingtonian was appointed to the Court in 2006. She received her Juris Doctorate with High Honors from The National Law Center at The George Washington University. Judge Fisher prefaced the arguments stating that he was glad to be in the “historic Howard University School of Law.” Julia Porter, Senior Assistant Bar Counsel for DC Bar, thought this exercise at Howard “great for the students because they get to experience…a hearing regarding an attorney’s misconduct putting in perspective for law students the importance of adhering to professional responsibility standards. Not doing so could mean the end of your career.”

The cases for this occasion seemed to be chosen considering the audience would be law school students. The first was an appeal to determine whether the lower court correctly held that a picture posted to Facebook should not have been admitted into evidence in a criminal prostitution case. The Court also reviewed a civil, right to counsel dispute. Last was a disciplinary hearing in which an attorney sought review of her case in which she was found to have violated the D.C. Rules of Professional Conduct. Students listened intently as the Court heard the cases, with the judges approaching all attorneys vigorously with questions. The judges stuck tightly to the schedule ending all three cases in an hour and a half.

After the proceedings, the Court adjourned and the judges exited the bench. They returned stripped of their robes to entertain student questions. Devon Cox, a first year law student at Howard probed, “As judges, do you prefer attorneys to be calmly persuasive or aggressive?” Referring to attorneys that may argue before him, Judge Fisher warned, “You don’t get to interrupt me, but I get to interrupt you.” For Judge Fisher, a middle ground is good; be passionate about your argument, but do not be so aggressive with your argument, that you disrespect the judges. Another question came from Dewight Flinch, another first year student: “I’ve heard in the law community that there’s a trend of bad writing being submitted to courts by attorneys. Has that been your experience?” All of the judges smiled. Judge Fisher explained, “I see bad writing all the time. The problem is you guys don’t have practice doing it; you send texts and tweets.” Judge Rigsby replied, “There isn’t bad writing, only bad rewriting.” Judge Thompson suggested, “It is rare that you do one draft and it be good. Allow enough time to proofread.”

Of course it is important for law students to understand the practical application of law and Howard University School of Law appreciated the opportunity to host the Court. The DC Court of Appeals reaching out to the law school community shows the Court’s support of law students and its desire to be a part of establishing the next generation of successful attorneys.