DC Court of Appeals Chief Judge Eric Washington and DC Superior Court Chief Judge Lee Satterfield will be answering questions from the public through the court’s Twitter account, @DCCourtsInfo. Those who want to pose a question to the Chief Judges can do so by including #AsktheCJs in the body of their tweet. 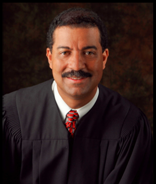 “In the past several years, the DC Courts have endeavored to keep pace with the social media revolution, by starting a Twitter feed, then a Facebook page, and more recently a You Tube page. These are more ways we can dialogue with the public to help answer questions, address concerns and build an understanding of the courts,” said Chief Judge Eric Washington. “Ensuring public trust and confidence in our judiciary is a chief priority, and we saw from last year’s Law Day twitter dialogue that the public does have questions for us and this medium allows us to answer those questions quickly and share our answers with all who follow the courts. The Q and A will support our vision of the DC Courts as ‘Open to All, Trusted by All, Justice for All.’”

Chief Judge Satterfield was appointed to the D.C. Superior Court by President George H.W. Bush in 1992. He became Chief Judge in 2008. He was appointed to a second four year term as Chief Judge in the fall of last year. Judge Satterfield was born in the District of Columbia. He graduated from St. John’s College High School in 1976 and from the University of Maryland in 1980 with a Bachelor of Arts in Economics. He is also a 1983 graduate of George Washington University National Law Center. He previously worked as an Assistant United States Attorney in D.C., as an attorney in private practice, and as a trial attorney at the United States Department of Justice.