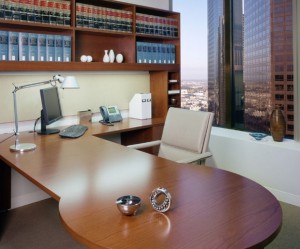 Diversity is still a struggle at many law firm offices. Who will sit behind a desk like this one?

Diversity is once again in the spotlight when it comes to the practice of law thanks to reporting by The American Lawyer magazine. The publication takes an in depth look at diversity in the legal profession looking closely at the diversity levels at the major U.S. law firms with it’s series, “The Diversity Crisis: What’s Wrong With This Picture?” The reporting is comprehensive investigating how law schools fall short when it comes to recruiting, retaining, and nurturing a diverse student body, to how law firms struggle to do much of the same: recruit, retain, and nurture. All of which inevitably leads to an ongoing and persistent struggle for African-Americans who choose careers in big law. The series even gets the perspective of successful African-American law firm partners who have in many ways been pioneers.

In its article about the dismal rate of African-American partners the publication highlights what is even a greater struggle for African-American women seeking to be law firm partners. “The law continues to fall further behind other professions in the inclusion of black professionals, according to a recent study by Microsoft Corporation,” reports The American Lawyer.

Is the problem systemic? That has always been a question. And the answer appears to be yes, it’s a system-wide problem. Who is doing what to ensure a steady pipeline of diverse attorneys if not law schools? “…national minority enrollment made only modest gains during the past decade. Minorities constituted slightly more than one-fifth of all J.D. students in 2003 and just more than one-quarter in 2012, according to the American Bar Association. That means legal education still has a long way to go before it reflects the diversity of the country as a whole, considering that minorities made up 37 percent of the population in 2012,” according to TAL’s reporting.

Once students are out of school worked a few years at a firm, perhaps became disenchanted, what then? How about turning to what has commonly been a refuge for attorneys of color, in house counsel positions? Many do go in house leading some firms to argue that companies are stealing away talented attorneys from diverse backgrounds. But why perhaps is it an easy thing to do?  Most argue work-life balance. “Working in-house means no billable hours requirements, a greater emphasis on work/life balance, and a more transparent path to advancement—all areas where firms fall short. ‘There are fewer unwritten rules and norms of behavior, and so it is clearer what you need to do to succeed,’ says Prudential Financial Inc. general counsel Susan Blount.”

Those looking at how firms will become more diverse also offer up that companies who employ the firms have to say diversity is a priority in order for firms to get the message.

Overall The American Lawyer points out what many already know that more work needs to be done to ensure that a pipeline exists which encourages African-Americans among other diverse groups to choose the legal profession, provides diverse attorneys with the resources to succeed, and helps foster careers which are productive, rewarding, fulfilling, and dare it be said personally satisfying.