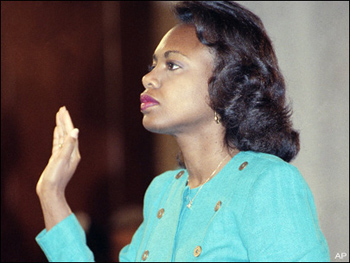 A new film is set to premiere about the circumstances which made black lawyer Anita Hill a household name.

A new documentary film which chronicles the circumstances which made Professor Anita Hill a household name is set to premiere at the upcoming Sundance Film Festival.

At a time where the ABC drama Scandal is a bona fide hit, the film could find an audience very much curious about race, gender, sexuality and of course scandal.

Others may say that the film might lead to more significant discussions about black sexuality a topic many say scholars seem afraid to address.

Last fall a number of speeches and conferences were held commemorating 20 years since Justice Clarence Thomas’ controversial confirmation hearings. Professor Hill who seldom makes public appearances made a number of speeches including one at the Georgetown Law Center entitled, “Context and Consequences: The Hill-Thomas Hearings Twenty Years Later” organized by one of her lawyers during the hearings Emma Coleman Jordan.

Hill is currently Senior Advisor to the Provost and Professor of Social Policy, Law, and Women’s Studies at Brandeis University.