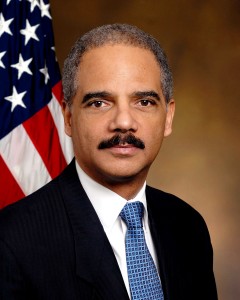 Eric H. Holder, Jr., has announced his intention to step down as United States Attorney General.

United States Attorney General Eric H. Holder, Jr. announced his intention to step down upon the nomination and confirmation of his successor on Thursday. Holder has served as the chief law enforcement officer of the United States since February 2009.

President Obama showered praise on a man he said believed steadfastly in justice and through a career spent mostly in public service demonstrated an active commitment to pursuing justice, “That’s why I made him America’s lawyer, the people’s lawyer.  That comes with a big portfolio — from counterterrorism to civil rights, public corruption to white-collar crime.  And alongside the incredible men and women of the Justice Department -– men and women that I promise you he is proud of and will deeply miss -– Eric has done a superb job.”

Holder a graduate of Columbia University’s Columbia College and the Columbia Law School first worked as a government attorney when he joined the Justice Department as a part of the highly regarded Attorney General’s Honors Program. It was at the DOJ that worked his way up as a prosecutor. Eventually he was nominated to serve as a judge of the Superior Court of the District of Columbia, the District’s trial court of general jurisdiction, but a job which required a presidential appointment. Later he was the United States Attorney for the District of Columbia before serving as Deputy Attorney General of the United States.

Despite his varied and vast accomplishments evaluation of his tenure as the nation’s top lawyer has already begun with many calling Holder’s time in office a mixed bag. Yet as is the case with jobs of such importance no one can say that Holder’s service was without challenges.

Washington Post: Eric Holder was the black leader Obama could never be

President Obama has not yet said when a successor to Holder would be named, nor is it immediately clear how soon that person’s confirmation can take place.