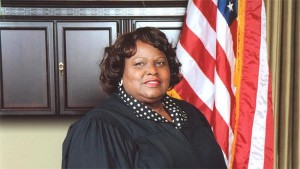 Louisiana Supreme Court Justice, Bernette Johnson, is poised to become the first black chief justice when the current justice retires. But not if Governor Bobby Jindal can stop it. The republican governor is challenging a U.S. federal judge’s ruling allowing Justice Johnson to take up the post.

The dispute over whether Johnson should be the first black justice to head the Louisiana court has highlighted long-standing racial tensions in the state.

The state constitution stipulates that the longest-serving associate justice takes the top post. Johnson began serving on the state Supreme Court in 1994 while white justice Jeffrey Victory did not join the court until 1995.

But Johnson was initially appointed to the Supreme Court, not elected, as part of a state settlement with the federal government over racial discrimination that expanded the court to seven justices from six.

Gov. Jindal’s position will serve as a reminder of the state’s unfortunate racist past. Lining up behind Gov. Jindal are the remaining state justices (all of whom are white).

Current chief justice Catherine Kimball attempted to resolve the dispute by asking members of the court to file briefs arguing the issue and having outside judges rule on succession.

But Johnson took her case to federal court, asking that the 20-year-old voting rights case be reopened and that her full tenure on the Supreme Court be reaffirmed.

The governor said in a statement, “The issue on appeal is not who should serve as the next Chief Justice, but whether the Louisiana Supreme Court should be prohibited by a federal court from interpreting the state’s constitution.”

Justice Johnson’s lawyer pushed back on that argument calling the governor out for a throwback position that harkens back to a time when “states rights” was racist code.

“That’s what the proponents of slavery said during the Civil War. It’s an age-old excuse,” said attorney James Williams.