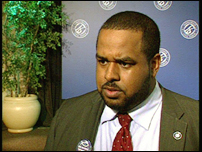 Joshua DuBois was settling into his first year at GULC when he opted to leave law school in order to campaign for then Senator Obama.  DuBois, pentecostal preacher, says that God lead him to find a way to merge his passion for ministry and public service.  According to the NYTimes, President Obama plans to name the 26-year-old to head the office of faith-based initiatives.  See, had you used God as your compass rather than having a 30 year relationship with student loan creditors, you too could be a friend of President Obama who had this to say about DuBois:

“Josh is a great friend and has really led the way for Democrats in terms of faith outreach,” Sen. Obama said in an email. “The grassroots conversations we’ve held across the country, our landmark evangelical meetings…are helping to change our nation, person by person.” – WSJ

DuBois got his feet wet working for Reps. Holt and Rangel, but all the while, he had his eyes fixed on Team Obama.

DuBois decided he wanted to work for Obama, then a candidate for the US Senate. He wrote to Obama’s campaign manager and got a form rejection. After Obama arrived in Washington, DuBois twice drove to his office but failed to get a job interview. After a third appeal, Obama hired him as a Senate aide. Part of his job was addressing faith issues.