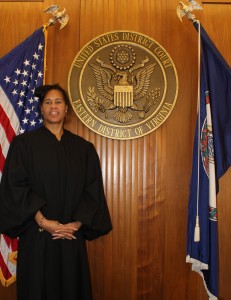 On Thursday Judge Arenda L. Wright Allen a judge of the United States District Court for the Eastern District of Virginia made history when she overturned the state of Virginia’s ban on same-sex marriage. It was a landmark decision which was much heralded as it marked the first time a same-sex marriage ban imposed by a Southern state had been overturned.

No stranger to making history when she was confirmed Allen was celebrated as the first African-American woman to sit on the federal bench in the state of Virginia.

One of the most remarkable things about Judge Allen’s 41 page opinion was that it began quoting Mildred Loving who was a co-plantiff in the landmark Loving v. Virginia case, which decades earlier after a ruling by the United States Supreme Court led to the dismantling of state of Virginia’s ban on interracial marriage.

Judge Allen’s decision quoted striking portions of Mildred Loving’s “Loving for All” remarks which were prepared for delivery on June 12, 2007 the fortieth anniversary of the announcement of the Supreme Court’s decision in Loving v. Virginia. Loving had written, “We made a commitment to each other in our love and lives, and now had the legal commitment, called marriage, to match. Isn’t that what marriage is?…Surrounded as I am now by wonderful children and grandchildren, not a day goes by that I don’t think of Richard and our love, our right to marry, and how much it meant to me to have that freedom to marry the person precious to me, even if others thought he was the “wrong kind of person” for me to marry. I believe all Americans, no matter their race, no matter their sex, no matter their sexual orientation, should have that same freedom to marry. Government has no business imposing some people’s religious beliefs over others…I support the freedom to marry for all. That’s what Loving, and loving, are all about.”

When she heard oral arguments in the case many said at the time that it was hard to pin down exactly how she would rule given her diverse set of experiences. Judge Allen over the course of her career prior to becoming a judge had been an attorney in the United States Navy’s Judge Advocate General’s Corps. Later she was both a federal prosecutor and a federal public defender.

In the days immediately following her ruling some have begun to say that Judge Allen who has served on the federal bench less than three years has already cemented her legacy.

Allen earned her undergraduate degree Kutztown University and her law degree from the North Carolina Central University School of Law. She was nominated by President Barack Obama for the judgeship on January 5, 2011, confirmed by the United States Senate on May 11, 2001, and received her judicial commission May 12, 2001.