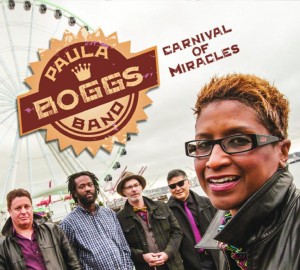 The Paula Boggs Band is partnering with the My Brother’s Keeper Alliance and The NAACP Legal Defense and Educational Fund, Inc. on a new project. [Photo Courtesy: Paula Boggs]

For nearly thirty years Paula Boggs distinguished herself in the practice of law first as an attorney in the Army General Counsel’s, then as a White House lawyer, later as a federal prosecutor, and finally as a corporate lawyer serving as Executive Vice President and General Counsel at Starbucks. When Boggs retired from her high-profile job at Starbucks she began to pursue other passions like being a musician and a community activist.

Boggs a singer, songwriter, and rhythm guitarist now has her own band the Paula Boggs Band which has released two albums,”A Buddha State of Mind” in 2010 and album “Carnival of Miracles,” earlier this year.

Boggs and the band who perform nationally are now committing to yet another undertaking. They are partnering with the My Brother’s Keeper Alliance and The NAACP Legal Defense and Educational Fund, Inc. to bring attention to the issues boys of color and men of color face in America today.

The band was recently joined by Seattle and LA-based rapper, J. Pinder to make a remixed version of, “Look Straight Ahead,” one of the songs from their latest album to highlight challenges faced by young people but to also encourage them to be hopeful about their future.

“I believe artists need to speak out and I wholeheartedly believe in equipping young people with skills they need to be successful in life. My Brother’s Keeper Alliance provides access to positive influences, like mentors, and programs that prepare youth to work hard and prosper, ensuring young people of all backgrounds have access to the middle class,” Boggs, said.

“The issues that disconnected youth face are extensive and the solutions are complex. When artists like Paula Boggs Band and J. Pinder, businesses, community organizations and activists partner with the My Brother’s Keeper Alliance, we can leverage our combined resources to address these challenges,” said Marisa Lee, managing director for the My Brother’s Keeper Alliance.

“The NAACP Legal Defense and Educational Fund, Inc. is honored to be associated with ‘Look Straight Ahead’ by Paula Boggs Band, artists whose work speaks into a moment of urgency with depth and inspiration, said Sherrilyn Ifill, LDF President and Director-Counsel.

Next year Paula Boggs Band, J. Pinder, will be joined by other artists for a show in Seattle, proceeds will be donated to My Brother’s Keeper Alliance and the LDF.