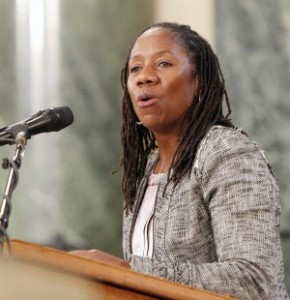 The NAACP Legal Defense and Educational Fund (LDF) has announced the appointment of its new President and Director-Counsel civil rights attorney and law professor Sherrilyn Ifill.

Ifill is just the seventh Director-Counsel and the second woman to hold the position after Elaine Jones.

Founded in 1940 under the leadership of Thurgood Marshall, who subsequently became the first African-American U.S. Supreme Court Justice, LDF was launched at a time when the nation’s aspirations for equality and due process of law were stifled by widespread state-sponsored racial inequality.

The LDF which coordinates legal advocacy on behalf of the NAACP is a leading civil rights organization. Recently, the LDF filed a brief in the Fisher v. Texas case which centers on the legal challenge to the use of affirmative action in college admissions. In addition to broad based civil rights advocacy the LDF does work centered on criminal justice, economic justice, and political participation, amongst other issues.

Ifill who is a tenured law professor at the University of Maryland Francis King Carey School of Law where she has taught since 1993 has long been a renowned voice on civil rights, voting rights, and broader issues of equity and justice. Prior to teaching she was an Assistant Counsel at the LDF.

Ms. Ifill formally succeeds the late John Payton who died in March. Since his death Debo P. Adegbile has served as Acting Director-Counsel.

As a legal scholar she was published several books including her seminal work On the Courthouse Lawn: Confronting the Legacy of Lynching in the 21st Century.

She attained her law degree from New York University Law School, and a bachelor’s degree from Vassar College. Ifill was admitted to the New York Bar in 1989.

Ifill is a frequent contributor to sites such as TheRoot.com and Politico, and frequently makes radio and television appearances.

She is married and the mother of three daughters Najma, Amali, and Jahia.