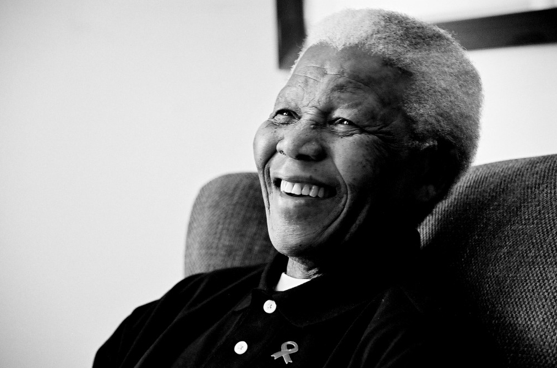 Nelson Rolihlahla Mandela who led South Africa’s civil rights movement from the streets and from behind bars, eventually rising to that nation’s presidency, thus becoming a global icon has died.

His death was announced in a televised statement by the current president of South Africa, Jacob Zuma.

The 95-year-old who the world came to view as a global symbol of democracy, peace, and reconciliation died Thursday December 5th at his home surrounded by family.

Nelson Mandela emerged onto the world stage in the late 1980’s when anti-apartheid protests began to heighten around the world. In the U.S. lawmakers, civil rights leaders, academics, and ordinary citizens pushed for divestment from U.S. based and international businesses which continued to do business in South Africa while the apartheid system which segregated blacks and white South Africans politically and economically was still the law of the land.

In 1994 he was elected the first black president of South Africa, by South Africa’s parliament after his African National Congress (ANC) Party came to power following South Africa’s first open election. It was the first time that black South Africans were allowed to vote in a national election. This victory came after years of protests and negotiations with the leaders in power. Following his release Mandela helped win black South Africans the right to vote, believing that winning political power would help bring about equality and justice for all.

Mandela served as president of South Africa for just one term from May of 1994 to June 1999 deciding at the time not to stand for reelection, in order to allow for an orderly transition of power. He very much believed in nurturing subsequent generations of leaders to inherit the mantle of leadership.

Early in life Mandela even before completing his legal studies, but after working under other attorneys, Mandela began working as a lawyer. He opened his own firm with a partner, and provided legal counsel for defendants in desperate need of legal assistance. While practicing law Mandela initially gained the attention of ANC party leaders who recruited him.

It was Mandela’s involvement with the ANC, which led to his imprisonment. Initially Mandela advocated non-violent means of resistance to segregation and discrimination. He later left South Africa, traveling abroad and receiving military training. That is when he and other ANC leaders approved of use of force. It was this turn to violence, which helped lead to Mandela spending 27 years behind bars. In 1963 Mr. Mandela and a group of other ANC activists were convicted of sabotage in the famed Rivonia Trial.

In his closing statement at the trial Mandela famously said, “During my lifetime I have dedicated myself to this struggle of the African people. I have fought against white domination, and I have fought against black domination. I have cherished the ideal of a democratic and free society in which all persons live together in harmony and with equal opportunities. It is an ideal, which I hope to live for and to achieve. But if needs be, it is an ideal for which I am prepared to die.”

Mandela did not die in the fight of equality and justice but he did make a great personal sacrifice. While imprisoned on Robben Island for years Mandela was made to perform manual labor. He was unable to see his family including his young children for years. Also during that time his then wife Winnie was targeted by authorities and also spent time behind bars. Eventually Mandela was released on February 11, 1990.

Colin Powell, the former United States Secretary of State, and Chairman of the Joint Chiefs of Staff, said Friday of Mandela, “I always see him as the George Washington, Abraham Lincoln, and Martin Luther King of South Africa.”

Not just the father of a free and democratic South Africa, Mandela who was married three times had six children, three of whom survive him. He has 17 grandchildren and 14 great grandchildren.

In the years since he left political office Mandela has gained more acclaim. His work as a philanthropist was cemented most notably by the work of the Nelson Mandela Foundation, the Nelson Mandela Children’s Fund, and the Mandela Rhodes Foundation. These associations collectively furthered Mandela’s commitment to democratic ideals, the welfare of children, youth, and families, and leadership development across Africa.

Leaders from around the world including American civil rights leaders have begun to mourn Mandela’s loss.

“There are few men or women who leave such an indelible imprint and impact on the world that they are remembered, honored and celebrated by nations near and far for centuries after they depart. There are few people for whom even all the words in every language fail to convey the magnitude and meaning of their lives. Without a doubt in mind or heart, I know that Nelson Mandela is one among a very select few,” said Marc Morial, President of the National Urban League.