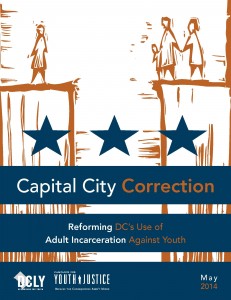 A new report by DC Lawyers for Youth and the Campaign for Youth Justice calls for juvenile justice reforms in D.C. and nationally.

A new report released by the DC Lawyers for Youth and the Campaign for Youth Justice  “Capital City Correction: Reforming DC’s Use of Adult Incarceration Against Youth” calls for an end to the indiscriminate practice of sending youth in the District of Columbia to adult jails without consideration of what the report points out are the larger implications of adult pre-trial confinement.

“In 2012 youth in D.C. spent more than 10,000 days in adult jails,” said R. Daniel Okonkwo Executive Director of DC Lawyers for Youth. Okonkwo said that the problem in the District of Columbia stems from a statute which allows prosecutors in the office of the United States Attorney for the District of Columbia the ultimate say as to whether youth are charged as adults or as juveniles. “The citizens of D.C. don’t have the ability to decide who are our own children are.”

The process is similar in other places across the nation. Still, a number of states have also begun to study the number of youth who are incarcerated as adults including Maryland and those states are also looking into what the right practice with regards to case transfers between juvenile or adult courts and adult or juvenile pre-trial detention for youth in their respective jurisdictions should be, says Carmen Daugherty the policy director at the Campaign for Youth Justice. Daugherty points out the importance of pre-trial services for youth such as access to education and or counseling, for example. Daugherty argues that adult jails are no place for youth as the facilities are often inadequate to care for their educational, behavorial, or social needs. She says that youth housed in adult jails while awaiting trials are at greater risk for victimization. Being in adult jails also puts the youth at risk for harming themselves, even attempting suicide.

In 2007-2008 Jawn Peterson was housed in an adult jail while awaiting trial on an adult charge. Peterson who was college bound and even had scholarship offers to play college sports says it was his first time in trouble with the law. While his attorneys had argued for home detention, which might have allowed Peterson to continue his education with the hopes of finishing high school, the law as it exists gave the judge in Peterson’s case no flexibility.

While in the adult jail Peterson says he and his fellow youth inmates had no educational programs. He says there was, “a school with no books, no writing utensils, no reading materials.” He also says that the young people became greater victims of their environment and that many felt isolated from their families and communities, feelings which fostered anger and a sense of helplessness.

Carmen Daugherty notes that one of the hopes of the juvenile justice system is to deter future crime, and to help youth inmates be rehabilitated. She says that there is no evidence that putting youth into the adult system cuts down on the likelihood that the youth will relapse or return to their old behavior.

Daugherty and Okwonko say that the policy reforms will help most. Their groups argue that it’s most important to institute reforms and that D.C. would be the perfect place to start. The proposed reforms include: 1) prohibiting the pre-trial detention of youth in adult facilities; 2) allowing for “reverse transfer” motions, in which a judge can hear arguments about whether a youth is best served by being entered into the adult or juvenile system; and 3) end the automatic “once an adult, always an adult” rule meaning if a youth was ever charged as an adult any subsequent cases are automatically handled as part of the adult system.

Many of the proposed reforms would almost have certainly helped Jawn Peterson and made his life today easier. He says of his life now that he’s understanding that because of his conviction, “You have to work three times as hard as a normal person.”

Peterson though is moving forward. He admits that it has been hard trying to attain an education or employment after completing his sentence. Still he is hopeful. Peterson is working hard to stay out of trouble. While incarcerated he completed an electrical apprenticeship program. He’s now involved in a studio training program and also with the Free Minds Book Club & Writing Workshop which aims to to introduce young inmates to the positive affects of reading and creative writing.