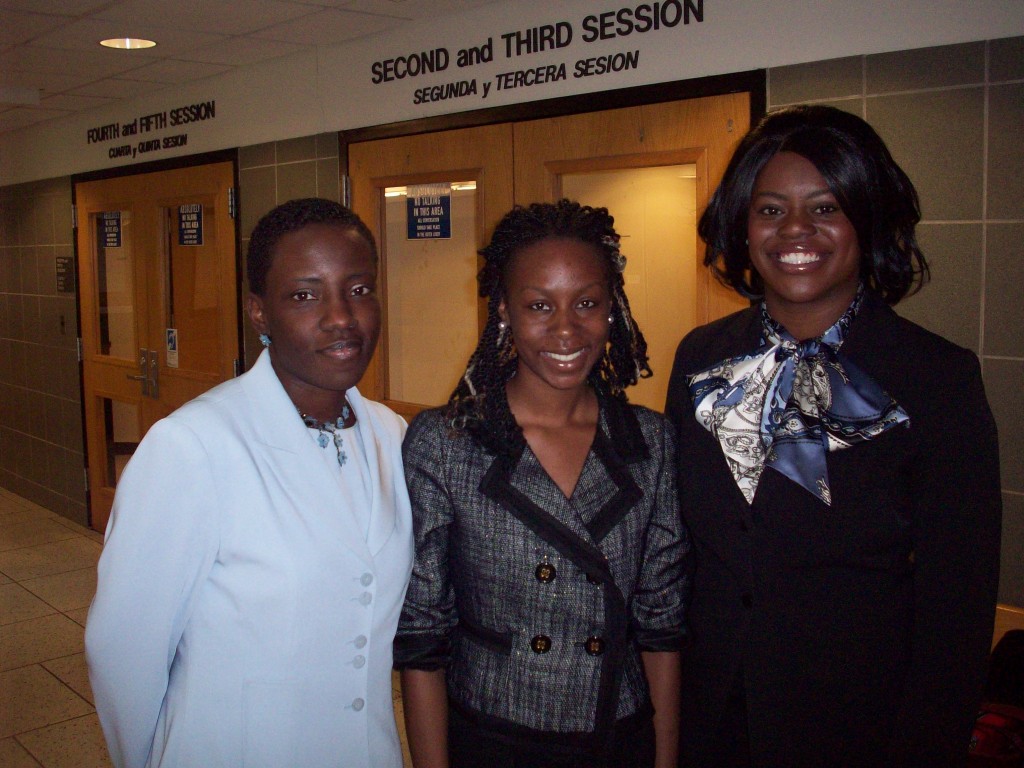 While in Boston for the Harvard BLSA Spring Conference, I stopped by the Roxbury Court House where my Georgetown Law classmate, Judge Shannon Frison, was presiding over a trial. At the defense table sat a petite teenager in a Sunday dress charged with disturbing the peace, resisting arrest, and assaulting a police officer.

With her future hanging in the balance, Kenyatta Little, had elected to have counsel provided by Harvard Law School’s Criminal Justice Institute. Kenyatta’s team consisted of HSL 3L, Nneka Ukpai, and her HLS instructor, Dehlia Umunna, Esq. The program allows HLS students to try cases under the close supervision of a licensed attorney.  According to HLS:

Fighting for their criminal clients is the hallmark of the HLS Criminal Justice Institute, a curriculum-based legal clinic founded in 1990 by HLS Professor Charles Ogletree ’78. Through the Institute, which is currently directed by Clinical Professor Ronald Sullivan’94, third-year HLS students have the opportunity to represent indigent criminal defendants and juveniles in Boston-area district and juvenile courts, all under the supervision of expert clinical faculty members.

While simultaneously enrolled in a clinical course, CJI students are assigned five or six criminal cases each semester and handle everything from arraignment through trial, including interviewing witnesses, investigation, motions practice, developing case theories, and preparing and conducting witness examinations and argument.

When I entered the courtroom, Ms. Ukpai was delivering her closing argument.  In a manner both composed and compassionate, the future litigator assembled the evidentiary pieces of the case–her client was an active high school student, who rather than disturbing the peace, had only been trying to calm the uproar of others; the police officers gave conflicting accounts of the evening; and one officer’s assertion that he was hit in the chest by the half-pint defendant seemed to defy common sense.  At her conclusion she’d painted a convincing portrait of innocence.

While the prosecutor fumbled with papers and repeated himself before abruptly ending his closing statement, Ms. Ukpai knew the case cold.  The only time she consulted a notepad was to read verbatim testimony damning to the state’s case.  As I listened to Ms. Ukpai, my eyes scanned the courtroom for Kenyatta’s support system–a family member, a classmate, a community activist, a minister, even a member of the black press.  I saw no one.  (A quick google search revealed that aside from a brief arrest mention in a local blog, no one had bothered to even report on how such a case ended up going to trial). I couldn’t help but wonder if anyone cared about this young woman.  My answer came an hour later when the jury returned with its verdicts.  As the first charge was read, Dehlia Umunna, Esq. draped her arm around her trembling client, who with each “Not Guilty” regained a little more of her life which had hung in the balance for nearly a year.

This was Ms. Ukpai’s first trial.  Attorney Umunna has likely tried hundreds of cases. Their obvious preparation and genuine concern made them both look like pros.  The Institute’s website states:

The mission of the Criminal Justice Institute is to educate Harvard Law School students in becoming effective, ethical and zealous criminal defense lawyer-advocates through practice in representing indigent individuals involved in the Massachusetts court system as well as to research and present issues and debates about the criminal and juvenile justice systems in order to effect local and national reform.