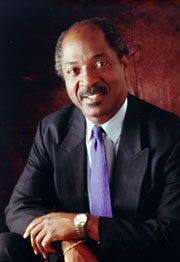 A man after our own heart, Professor Ogletree is continuing Houston’s legacy of educating this country’s best minority lawyers.  Professor Ogletree is faculty advisor for Harvard’s Black Law Student Association (BLSA) chapter, the largest in the country.  Last spring the students won Chapter of the Year. Harvard

. . . Obama has long cited him as a mentor. Ogletree’s in­terest in civil rights and racial disparities in the criminal justice system made him a natural choice as Obama’s adviser on black issues in the campaign.

When the NAACP believed it was obligated to support Clarence Thomas in his confirmation battle for the Supreme Court, Ogletree wrote a 30-page report that changed its mind.

Final word: We’d be remiss in not pointing out how zexzy Professor Ogletree looks since shaving his head. Peep the new do and terrific performance on Comedy Central’s election night show here.