“Something Else” is a new category we’ll be featuring here at OBABL. It was inspired by an anonymous commenter who confessed that after investing an enormous amount of money, time and energy on a Top-Ten-Tier (TTT) T-14 law school, he now believes the law isn’t for him. We here at OBABL think that might very well be the case…

But be encouraged! Many have had such a revelation and gone on to more fulfilling and, dare we say, lucrative careers. And doing “something else” doesn’t necessarily mean you’ll be out of the legal loop. To the contrary, today in our on-going Obama Posse List series we feature two individuals who chose “alternative careers.” 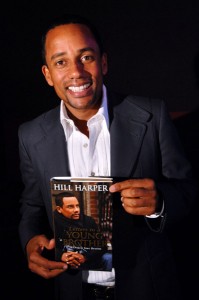 Born Frances Harper, we know him from the popular spin-off, “CSI: NY” where he plays Dr. Sheldon Hawkes, the fallen surgeon who left regular practice after a few patients died on his table. (His film credits include Spike Lee’s He Got Game and the Oprah Winfrey-produced slave drama Beloved.)  You can also spy him in the “Yes, We Can” viral video and People magazine’s “Sexiest Men Alive.”

Hill always dreamed of being an actor. (You can do that when your parents are doctors). But Hill knows Hollywood is about as reliable to African Americans as law firms are, which is to say not very. To that end, Hill has established himself a nice side hustle (we should all have one). He’s involved in several nonprofits and his “Letters” book series has really taken off.

Hill attended HLS with the President-elect where they no doubt bonded over their midwestern roots. A member of Obama’s national campaign finance committee, the thespian also campaigned for Mr. Obama.

This one is a television writer who doesn’t like being in front of the camera. (We had to go back decades to uncover a picture). Michelle Obama’s Princeton classmate, Crystal Nix Hines, has just as inspiring a story as Hill’s. Read it after the jump.From MSNBC/NYTimes:

When Crystal Nix Hines became the first black editor of the student newspaper, The Daily Princetonian, some black students wondered why she wanted to run a “white” newspaper. Mrs. Obama, however, was thrilled that a historic barrier had fallen.

That did not stop her, however, from confronting Ms. Hines, a friend, over an article that contained what Mrs. Obama took to be inappropriate characterizations of a black politician. “ ‘You need to make sure that a story like that doesn’t run again,’ ” Ms. Hines recalls her friend saying with utter calm.

After graduating from HLS, Hines tried the law thing. She worked for O’Melveny & Myers LLP and did four years at the U.S. Department of State. At the turn of the century, she wised up and headed to Hollywood.

Hines, who wrote for The New York Times both before and after law school, opted to forgo legal work and instead pursue television writing in Hollywood. She penned and produced several episodes of “Commander in Chief” for director Rod Lurie, who went to the same Hawaii high school as Obama, and also served as executive story editor for the second season of “Alias,” created by sci-fi/fantasy mogul (and longtime Democratic Party activist) J.J. Abrams. On a campaign website, Hines wrote about Obama, her friend of nearly 20 years: “When he told me he wanted to enter politics to make a difference in people’s lives, I remember thinking, ‘Right, another politico who wants to feed a giant ego.’ But over time, as we spent hours together editing articles at the Harvard Law Review, I came to see and understand the depth of Barack’s commitment to social change.”