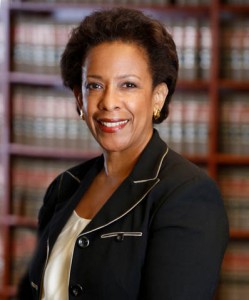 Loretta Lynch was nominated by President Barack Obama to be the 83rd U.S. Attorney General.

Lynch has been the top prosecutor in New York’s Eastern District since May 2010 also previously held the job from 1999-2001. In that post she oversees all federal criminal and civil investigations and cases in Brooklyn, Queens and Staten Island as well as Nassau and Suffolk Counties on Long Island. Aside from leading her own office, Lynch holds several leadership roles within the Department of Justice: serving as a member and chair of the Attorney General’s Advisory Committee and as a member of the Department of Justice’s Diversity Council.

“It’s pretty hard to be more qualified for this job than Loretta. Throughout her 30-year career she has distinguished herself as tough, as fair, an independent lawyer who has twice headed one of the most prominent U.S. Attorney’s offices in the country,” said President Obama.”Loretta might be the only lawyer in America who battles mobsters and drug lords and terrorists and still has the reputation for being a charming people person. That’s probably because Loretta doesn’t look to make headlines, she looks to make a difference. She’s not about splash, she is about substance.”

A 1981 graduate of Harvard College and 1984 graduate of Harvard Law School she began her legal career as an associate at Cahill Gordon & Reindel LLP. After leaving Cahill Lynch joined the U.S. Attorney’s Office in New York’s Eastern District and worked her way up before being appointed by then President Bill Clinton to the top job. When she left the office she became a partner at the firm Hogan & Hartson.

In her remarks following the President’s nomination she thanked Mr. Obama for his confidence in her ability to succeed an Attorney General who she said she admired and a department that she loves.

“The Department of Justice is the only cabinet department named for an ideal, and this is actually appropriate, because our work is both aspirational and grounded in gritty reality. It’s both enobling and it’s both profoundly challenging. Today I stand before you so thrilled, and frankly so humbled to have the opportunity to lead this group of wonderful people who work all day and well into the night to make that ideal a manifest reality. All as part of their steadfast protection of the citizens of this country,” Lynch said.

Lynch’s nomination has won praise including from the man she has been nominated to replace in office.

“Loretta Lynch is an extraordinarily talented attorney, a dedicated public servant, and a leader of considerable experience and consummate skill.  I am certain that she will be an outstanding Attorney General, and I am delighted to join President Obama in congratulating her on this prestigious appointment,” Holder said in a statement. “I am confident that Loretta will lead the Department of Justice with integrity, honor, and distinction.  I congratulate her, once again, on her appointment.  And I wish her the best of luck.”

Lynch’s nomination must still be considered and approved by the United States Senate. There will first be hearings before the Senate Judiciary Committee, a vote, and then a vote by the full Senate.

Senator Chuck Grassley (R-IA) now the ranking member on the Judiciary Committee and who is expected to become chairman when Republicans take control of the Senate in January said he expects Lynch will receive a “fair, but thorough” review of her background, career, and philosophy before she is confirmed.

“I congratulate Ms. Lynch on her nomination.  Being selected to serve as our nation’s top law enforcement officer is both a tremendous honor and responsibility,” Grassley said. “U.S. Attorneys are rarely elevated directly to this position, so I look forward to learning more about her, how she will interact with Congress, and how she proposes to lead the department.”