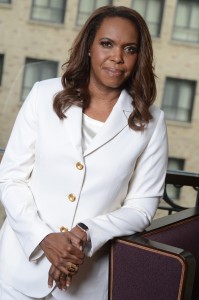 Rhonda Mims of Paul Hastings has been named Board Chair of The Executive Leadership Council. {Photo Credit: Michael Quain of Los Angeles}

Rhonda Mims the Managing Director of Corporate Responsibility for leading international law firm Paul Hastings has been named the board chair of The Executive Leadership Council.

“Rhonda’s dedication to The ELC has become more and more evident over the years as she supported our leading philanthropic initiatives generating over $2 million in scholarships and sponsorships for the next generation of global black leaders,” said Ronald C. Parker, President and CEO of The Executive Leadership Council.

The Executive Leadership Council is a non-profit member organization committed to the development of black leaders around the globe. The organization helps members develop as executives, as leaders, and as philanthropists. Among their initiatives are the Mid-Level Manager’s Symposium, a seminar for aspiring managers; The Corporate Board Initiative, which assists in the development of members to serve on corporate boards; and the Women’s Leadership Forum, an annual convening of senior Black women executives from the business, political, and academic arenas.

Mims who has had a diverse career in law and business previously served as vice chair of ELC’s board, she succeeds Carla Harris, Vice Chair, Morgan Stanley.

“It is an honor for me to serve the members of this exceptional organization as chairman of its board of directors,” Mims said. “It is particularly gratifying as we celebrate The ELC’s 30th Anniversary this year and take stock of the progress made over the last three decades and challenges of advancing global black leadership in the C-Suites and on the boards of major corporations. ELC members include several CEOs, dozens of board members and hundreds of executives who are prepared for the highest leadership responsibilities in business.”

Earlier in her career she was Senior Vice President overseeing corporate social responsibility for ING U.S. while concurrently serving as President of the ING Foundation. She started with ING as a Territorial Sales Manager before becoming counsel for the company.

Mims also currently serves on the Board of Directors of the Thirty Percent Coalition, a group committed to the goal of women, including women of color, holding 30% of board seats across public companies.

An active member of Alpha Kappa Alpha Sorority, Incorporated, she very much believes in community service and is a member of the board of the Harlem School of the Arts. She also serves on the board the Citizen’s Committee for the Children of New York, the oldest child advocacy organization in New York City.