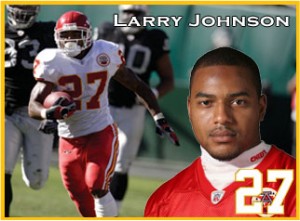 Kansas City Chiefs running back, Larry Johnson, returns from an unpaid team suspension just in time to lawyer up.  According to Courthouse News:

After a woman rejected his offer to buy her a drink, Kansas City Chief running back spit his own drink in her face, saying, “First I’m gonna kill your boyfriend and then I’m gonna kill you, and that’s a promise,” the woman claims in Jackson County Court.

For those of you wondering why an NFL stud would feel that threats were necessary to secure dates, you can stop scratching your heads.  It seems Johnson has issues.  This from the KCStar:

That day,The Star broke a story that Johnson faced simple-assault charges in Kansas City Municipal Court for an alleged February incident involving another woman. He also has a December court date in that case.

Prosecutors dropped charges in a 2003 case after he agreed to enter a domestic-violence diversion program. In 2005, a woman who accused Johnson of pulling her to a nightclub’s exit later changed her story and declined to prosecute.