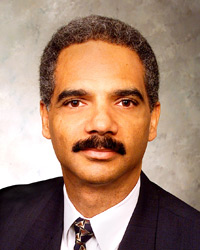 As OBABL predicted, Eric Holder has been nominated to serve as Attorney General.  It is a historic moment and one that Holder has seemingly been working towards for much of his career.  He has served as a US Attorney for the District of Columbia and a Deputy Attorney General—the first African American, incidentally, in either position.  Simply stated, I am proud of him.  My admiration, although sincere, is not without its complexity.

Mr. Holder’s time as a litigation partner at Covington & Burling LLP coincided with the period I chronicled in an essay entitled, “Law firm segregation reminiscent of Jim Crow,” for The Huffington Post.  An abridged version appears below, but you can read it in its entirety here.

Blacks at Covington comprise less than 5% of the Washington office’s partners and associates, but make up 30% of its staff attorneys, the non-partner track lawyers who handle the menial legal tasks that associates shun. While paralegals have their own offices, as many as ten staff attorneys share windowless file rooms.  Segregated from other lawyers in the firm, we go uninvited to attorney-only firm functions and are not provided jury duty or maternity leave…

The vast majority of Covington’s black attorneys do no substantive work, have no control over their case assignments and no opportunity for advancement. This seems to be just the sort of structure the U. S. Equal Employment Opportunity Commission warned against in its 2003 “Diversity In Law Firms” report which stated, “In large, national law firms, the most pressing issues have probably shifted from hiring and initial access to problems concerning the terms and conditions of employment, especially promotion to partnership.”

So dysfunctional was Covington that while addressing the issue of racial sensitivity at a staff meeting, a partner told a joke that referenced his pet monkey.

Covington’s public response confirmed much of the above.

Since President-elect Barack Obama’s announcement regarding Mr. Holder, some have suggested that Mr. Holder’s seeming disinterest in the plight of blacks at his firm should be taken into account when evaluating his fitness to be Attorney General.  From one blogger:

It’s troubling to hear about black professionals in supposedly high prestige workplaces being subjected to disparate treatment while a prominent black partner did little or nothing about it.

The Justice Department, in a sense, is the most powerful law firm in the world… If a black partner in one of the most powerful Washington law firms can turn a blind eye to the discrimination in his own firm, I have to question why Barack Obama believes he is the right man to become Attorney General of the United States [.] SkepticalBrotha

I, for one, hope that Mr. Holder’s affiliation with Covington does not impede his opportunity to once again serve his country. I do believe, however, that it is important to acknowledge the fact that Mr. Holder’s mission at Covington did not include addressing the disparate treatment of minority attorneys working in his firm.

My personal exchanges and observations of Mr. Holder after the jump.

I have been reluctant to bring up the behavior of Covington’s black lawyers—partners, associates and staff attorneys—because our stratification is emblematic of the messy, convoluted class structure that has plagued us since the division of labor among slaves. The minority partners and associates at Covington followed the firm-wide policy of excluding staff attorneys from their activities.  I would have assumed that Mr. Holder was unaware of our existence were it not for the two emails he sent to black staff attorneys.

The year he chaired the United Way Campaign, he solicited our participation.  I obliged, but demurred on a later invitation to attend a firm “Meet & Greet” for a black political candidate. While black higher-ups at Covington may have wanted the financial support of staff attorneys, and when it suited them, a public showing, it was apparent they otherwise wanted nothing to do with us.  One example:  When a college classmate learned that I was working at Covington, she insisted I connect with two of her friends who were black partners and sent an email to the three of us encouraging us to meet.  When they were noncommittal, I reached out to each separately and received a similar brush-off. In mentioning such an exchange, one risks sounding petty, but anyone who has ever worked in a firm will tell you those “relationships’ formed over coffee, a round of golf or a common interest are needed to sustain a career.

It’s worth noting that the white partners and staff attorneys didn’t have the same aversion to establishing relationships with white staff attorneys despite their subclass status.  One bonded with a partner over ties to the Federalist Society and was able to promote the right wing organization while billing his activities to the firm as client development.  Another staff attorney became drinking buddies with the associate heading our project as well as the partner who managed the staff attorney group.  During a slow patch at the firm when many had no work, this staff attorney was given a “special project” that allowed her to bill as much overtime as she wanted even though she had already given notice that she was leaving the firm for a government job.

I wasn’t looking for anyone to bend the rules on my behalf but having help navigating would’ve been nice. Perhaps the junior partners I spoke of earlier were still in the “proving” stage and couldn’t risk a status downgrade by associating with a staff attorney.  This same rationale doesn’t hold for a black partner like Mr. Holder, who earned his chops in government before allowing Covington to exploit his connections and expertise.  One would expect that such a person would wield the kind of power once associated with the late Ronald Brown, who at the DNC would frequently make time even for interns like me. For example, at an election results party in 1990, he introduced me to the governor of Arkansas and further suggested that I volunteer for his campaign.  Instead, I went to law school, but that’s another story for another time.  My real point is that, as Vernon Jordan likes to say, “To whom much is given, much is required.”  If Mr. Holder wasn’t aware of the dynamics of the staff attorney group, he should have been.  I doubt the type of Jim Crow-ism that Covington is engaging in would have gone on unnoticed and unchecked at Akin Gump where a life-sized portrait of Mr. Jordan greets all comers.

But there is another issue.  What responsibility do black attorneys at any level have to their own career development?  In retrospect, I recognize that we can’t seek to align ourselves only with other blacks.  It is essential that we be open and trusting of anyone who extends a hand.  While the black partners shunned me, a highly regarded white female partner was supportive.  The high marks she gave me for work on one of her cases led to my receiving one of the highest bonuses ($10,000 prorated) of any staff attorney my first year there.  Still, when I started being subjected to hostile treatment for voicing my objection to the use of racial slurs in the office and speaking out about Covington’s practices, I didn’t seek the aid of the supportive white partner or Mr. Holder.  When I was “laid off,” I simply picked up my journals containing all the juicy Covington tidbits I’d been collecting for my next book and got on with it.

In truth, I did not join Covington to become a partner.  I, frankly, have little interest in practicing law.  I am a published writer, a USA Today columnist, and contributor to National Public Radio.  But what about the minorities sitting in the bowels of Covington who are qualified to do substantive legal work?  What about the black associate who is getting pushed out or the staff attorney who feels like he’s riding on the back of the bus?  And why are so many smart and—at some point—ambitious black attorneys willing to subject themselves to a level of work and disrespect that would make Charles Hamilton Houston weep?  I don’t yet have answers.

Whether Covington’s treatment of staff attorneys as a minority class is illegal will soon be taken up by the courts.  It is an issue that appears ripe for review by the next US Attorney General.  How ironic.