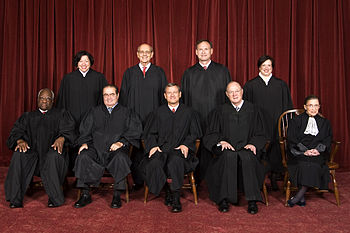 In my latest USA TODAY column, I offer some sobering predictions for this Supreme Court term.

The Supreme Court term is shaping up to be a significant one on issues involving race. The justices are poised to decide a handful of high-profile cases that could have a long-term impact on African and Hispanic Americans. And the fact that the Roberts court is more conservative than its recent predecessors does not bode well for minorities.

The influence of conservative justices has already been witnessed in the top court’s January decision on Texas’ redistricting maps. Based on the 2010 Census, Texas gained four congressional seats because of 4.3 million new residents, 65% of whom are Hispanic. But the Republican-controlled Texas Legislature drew up new maps that favored the GOP in three of the four new districts. Minority rights groups sued in federal court, which led a three-judge panel to propose redrawn maps more fair to Hispanics.

Then the top court entered the fray and rejected the judges’ new maps, ruling that they lacked deference to the ones drawn by the legislature. Ultimately, Texas was forced to delay its primary until May 29. A federal three-judge panel approved interim maps that create at least two new districts more favorable to Hispanics, though rights groups claim the plan still does not go far enough.