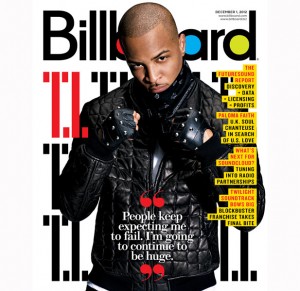 In a new issue of Billboard magazine the rapper T.I. reveals that actor & rapper Will Smith tried unsuccessfully to lobby Attorney General Eric Holder and the Obama administration for help in winning him an early release from prison.

Through the years, you’ve mentioned different people being supportive of everything you’ve gone through, including Eminem. Who else has been there to help?

As you mentioned, of course, Em. He was extremely supportive and inspirational during that time. Busta Rhymes, Puffy, Lyor Cohen, Russell Simmons, Nelly, David Banner, Charlie Mack, Will Smith. Will actually went as far as getting in touch with [attorney general] Eric Holder and the Obama administration trying to see if we could get some kind of release. He was very politely told that was not possible. [laughs]

It was the last time I was going back, and I was going to court for my probation violation. He was in deep discussions about it. And he’s been a huge contributor to the administration, and I mean not just in finances, I’m talking about time and other kinds of efforts, so it ain’t like his words were falling on deaf ears. But I understood. I didn’t even expect no help. I didn’t expect nobody to be able to help me. I knew I made my bed and I knew I had to lay in it.

According to reports in 2011 after serving 10 months of an 11 month prison sentence due to a probation violation. The star had served time for trying to buy illegal firearms from federal agents in 2007.