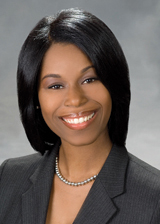 Shirlethia Franklin a 2004 graduate of Mississippi’s Tougaloo College and a 2007 graduate of Howard University’s School of Law has been named a White House Fellow it was announced by The White House.

Franklin was most recently an associate at Alston & Bird where she was responsible for managing and defending complex litigation matters and counseling clients on legal issues in the areas of product liability, medical malpractice, mass tort, and toxic tort law. She was with the firm for nearly five years.

Earlier in her career she was a law clerk to the Honorable Alexander Williams, Jr. a judge of the U.S. District Court for the District of Maryland. Franklin clerked for a year immediately following graduation from law school.

In an announcement on the school’s website Howard University School of Law Interim Dean Okianer Christian Dark said, “We are so very proud of Ms. Franklin. On behalf of the law school, we congratulate her on this major accomplishment.”

The law school notes that Franklin distinguished herself in law school as a Merit Scholar and president of her first-year class. She went on to serve as editor-in-chief of the Howard Law Journal during her third year of law school.

Away from work she is a member of Delta Sigma Theta Sorority, Inc., and as a cancer survivor, volunteers with local charities and support groups, Tougaloo notes.

She will work at the U.S. Department of Justice.