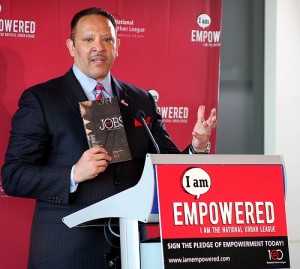 The National Urban League released its annual State of Black America report yesterday at Howard University. The theme of this year’s report borrows from the Occupy Wall Street movement. “Occupy the Vote” challenges African Americans to vote. The “Occupy the Vote to Employ, Educate & Empower”  report considers progress towards equality for black, white and Latino Americans.

“The bottom line is that the recession has caused slippage of progress in the status economically of African-Americans and when we talk about these issues, we are trying to ensure that any recovery that’s being articulated and designed is a recovery that includes everyone, that it is not just a recovery for some,” Morial said.

Serving more than 2.6 million individuals in 2011 alone, the National Urban League and its 98 chapters are the nation’s economic first responders, helping to bring those most profoundly affected by this recession into the economic mainstream.