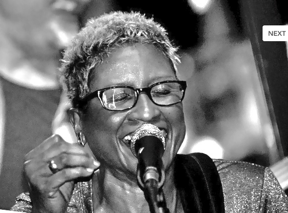 The Paula Boggs Band will take the stage at Austin’s Musicians For Equal Opportunity (MEOW) Conference on October 26th and headline at The Belmont on Sunday, October 27th. How Boggs came to write and perform what she describes as “Jazzy, Bluesy, Folk-Rock” songs after ten years serving as Executive Vice-President, General Counsel, and Secretary of Starbucks Coffe Company is a facinating story, recently shared in a two-part series in the Seattle Medium. Let’s begin with Boggs’ childhood.

As the oldest of four, Boggs’ family had settled in segregated Petersburg, VA in the 1960s. Her mother, Janice Barber, was from Washington, D.C., an African American Methodist Episcopalian, and an educator in the Richmond public school system. Her father, Nathaniel Boggs, Jr., was born in Alabama, was a Catholic and a biology professor who received his first Ph.D. of Zoology at Howard University and served as the Dean of Science at both Virginia State and Florida A&M.

During her teenage years, Paula’s life took several unconventional turns. She attended high school in Germany and Italy where the outsider repeatedly won class president. At 16 she decided to join the Army as a way of financing college. In order to postpone active duty, she went to UC Berkeley School of Law. Notwithstanding the T-14 law school, Boggs is candid about her legal career.

I am your quintessential accidental lawyer,” said Boggs. “Called to be a leader and law was expedient…I had no intention of being a lawyer beyond the four years of military commitment.

For her warm up, she did stints as a White House staff attorney, an Assistant United States Attorney, and a Big Law partner. In 1997, Boggs left her firm Preston, Gates & Ellis (now K&L Gates) to be deputy general counsel of Dell. She then set her sights on the general counsel job at Starbucks and used her connections to get an interview.

Falling back on the importance of her relationships, especially throughout her community work in the Seattle area, Boggs called on friends who served on the board of the YMCA in Seattle where she had volunteered, and asked if they could assist with an introduction. The result was that several members of the board mobilized and advocated on her behalf and created such a buzz that she ended up with the interview and subsequently the job being named as Executive Vice President, General Counsel, and Secretary, and later, the Secretary of the Starbucks Foundation.

After 10 years at Starbucks, Boggs resigned at the end of 2011 to join Obama’s re-election campaign. Though she was passionate about helping ensure an Obama victory, she also knew the campaign had an end-date and she’d soon be returning to her true love — music. She had to call upon this old love when a close family member was taken from her.

In July 2005, Bogg’s sister-in-law Julie Boggs, who was married to her brother Dallas, was killed in an automobile accident leaving behind their two year old, Jada. Boggs and her partner, Randee Fox, would subsequently become legal guardians of Jada, whose father remains very active in her life while residing in Eugene, OR.

But time and music heal all wounds.

It’s a warm night in Seattle at the Nectar Lounge. On stage the Paula Boggs Band is setting up, and Paula Boggs’ signature bright smile flashing clearly from the darkened stage.

Read Part I and Part II of the Seattle Medium series.
Watch a Seattle Voices interview of Paula Boggs.