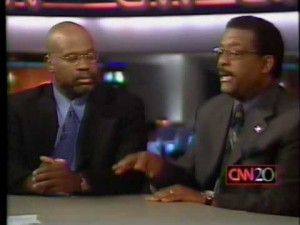 Christopher Darden and Johnnie Cochran who were a prosecutor and defense attorney during the famed O.J. Simpson murder trial exemplified the question of which side to take.

The late Johnnie L. Cochran, Jr. was at the time of his death one of the most respected and well-known American attorneys. As both a prosecutor and as a defense attorney, he succeeded in leaving his mark on a justice system that he believed was not always a just system for people of color. Cochran was so highly regarded because as a black lawyer he did extremely well in representing both sides. Today many attorneys of color often ask themselves which role to take, which side actually serves the best interest of minority communities in securing justice?

As an African-American law student seeking clarity about how I’ll eventually be able to best serve my community as an attorney, I have spoken with attorneys in various fields about how and why they chose their respective career paths. Specifically, I wonder how they believe their position can benefit and help ensure justice for minorities subject to the criminal justice system. The prosecutors believe having the discretion to choose which cases go to trial allows them to filter out the meritless and discriminatory prosecutions of accused minorities. The public defenders believe representing minorities allows them to make sure their client’s rights are observed despite how society may view them based on stereotypes. Some minority attorneys who have served on both sides agree that minority communities need representation on both sides to ensure equity and justice. Vincent Cohen, Jr., D.C.’s Principal Assistant U.S. Attorney said, “Law students need to understand that we need good lawyers on both sides. The job of ensuring justice requires everyone to get involved regardless of their position at trial.”

Prosecutors maintain that because they decide which cases go to trial, having minority attorneys on that side of the aisle is crucial to realizing a non-discriminatory justice system. Cohen, having worked as both a criminal defense attorney and currently as a prosecutor added, “Prosecutors have immense power and with that power comes tremendous responsibility. They have the discretion in the beginning of a case when it matters most. If they find the case lacks merit, they have the power to dismiss it, ensuring that the accused will never see trial [and not need a defense attorney].”

As it relates to career benefits, both prosecutors and public defenders are government employees and the government attorney’s pay pales in comparison to the pay of a private attorney. So, a career on either side requires a commitment to public service. It also means that sometimes attorneys opt for a career on the side that is more prestigious and offers a higher salary. The US Attorney position typically carries more prestige, as they are employees of the federal government, and part of the U.S. Department of Justice. In D.C. the salary of a public defender starts at about $66,630, while U.S. Attorneys for D.C. can earn more around $89,033.

Law students in deciding which path is best for them and which path will be most conducive to realizing a more equitable justice system should keep in mind both views. More importantly, regardless of which side the law school graduate chooses to pursue, one thing we can all agree on is the current justice system needs a makeover. Minorities continue to be disproportionally charged, convicted and incarcerated. Everyone involved in facilitating our country’s justice system has to decide that this is a problem that continues to destroy our communities. Whether you are a prosecutor, public defender, judge, paralegal or law clerk, be reminded that the future of communities of color depend in part on the future of the justice system.