The song opens with Sam explaining, “I was born by the river…” as was Mrs. Buckner whose birthplace rests on the James River.

Oh and just like the river I’ve been running ever since.

MELODY C. BARNES and Marland Buckner Jr. first bumped into each other about a decade ago in a breezy chance meeting on Capitol Hill. …Ms. Barnes, now 45 and President Obama’s chief domestic policy adviser, was then chief counsel to Senator Edward M. Kennedy of Massachusetts. Mr. Buckner was a legislative aide for Senator Charles E. Schumer of New York. “I was a random junior staffer so she quite appropriately paid me no mind,” Mr. Buckner, 42, said…What he didn’t know was that Ms. Barnes, who is known for her sharp mind and impeccable dress, was still searching for a soul-mate. 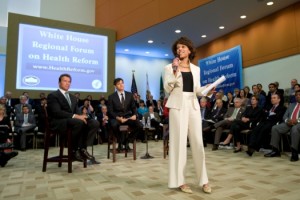 It’s been too hard living…

She and her friends often joked about the cast of characters who came courting, including the date who announced that his primary passion was whittling. But one of those conversations left Ms. Barnes in tears, recalled Laurie Rubiner, her good friend.

“We laughed about it, but it was heartbreaking,” Ms. Rubiner said. “Here is a 45-year-old woman who is so successful, yet the one thing that really defined success for her, family and love, was something she didn’t have.”

More details of the romance and a bit of Sam Cooke after the jump.


Then I go to my brother
And I say brother help me please
But he winds up knocking me
Back down on my knees
Ohhhhhh…..

That changed when Mr. Buckner and Ms. Barnes joined friends for a meal of fresh crabs on Labor Day weekend in 2007.

Mr. Buckner was entranced. It was his first glimpse of her sharp sense of humor.  Ms. Barnes was smitten, too, by the easy-going banter of the stylish, thoughtful, bespectacled man she had known for years. “Literally, the world just kind of shifted,” she said.

Then, in July 2008, Ms. Barnes decided to join Mr. Obama’s presidential campaign. Mr. Buckner was worried. They had both seen elections littered with romantic “train wrecks and catastrophes,” he said.

“I’m very concerned,” Mr. Buckner recalled telling her. “But I’m not going anywhere and you and I are going to happen come hell or high water.” He kept to that pledge…He drove her to the airport before dawn. He found a hotel for her when she became stranded in Chicago. They kept in touch several times a day, no matter what.

The experience helped her realize that she had finally found her life partner. “He was supportive of me, through all of it,” she said. “He’s my friend, my home base, the person I love and trust, respect and admire completely.”

He proposed on Christmas Day, several weeks after Mr. Obama selected Ms. Barnes to lead his domestic policy team. On June 13, they were married by the Rev. George B. Walker Jr. at the Peoples Congregational United Church of Christ in Washington, where family, friends and a bevy of Obama administration officials, including Rahm Emanuel and Valerie Jarrett, had gathered in celebration.

The Washington Post has great photos of the affair.  Our fav–Valerie Jarrett grooving to Michael Jackson’s “Pretty Young Thing.”