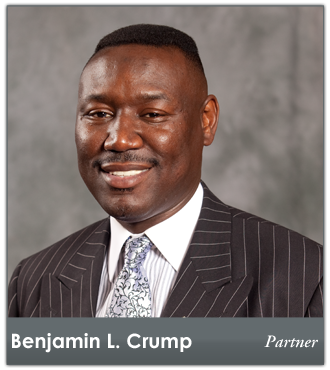 Over the course of the last several days as the parents of Trayvon Martin his father Tracy Martin, and his mother Sybrina Fulton have appeared in public discussing his tragic death one man has been by their side. That man has been the family’s attorney veteran Florida trial lawyer Benjamin L. Crump. So who is Benjamin Crump and is he the best person to represent the Martin-Fulton family’s interests?

Crump is a partner in the Tallahassee, Florida based firm he co-founded Parks Crump. A search of the Florida Bar Association‘s website shows that Crump is a member in good standing without any history of disciplinary infractions. The 1996 Florida State University College of Law graduate is no stranger to high profile cases. The spring 2006 edition of FSU Law School’s magazine features a cover story on Crump entitled, “Beating the Odds: Ben Crump, Winning the ‘No Win’ Cases.” The article discusses his road through law school to leadership of an established firm. Crump’s law firm biography reflects the high number of high profile cases to which he’s had his name attached.

In the early 2000’s Crump represented the family of Genie McMeans, Jr. a motorist who died after being shot in the back by a Florida state trooper. He also represented the family of Martin Lee Anderson, the Florida teen, who died after being beaten by guards at a Florida camp. Crump lists his own practice areas as being personal injury, and wrongful death.

This week in particular Crump has put forth more and more details about the final moments of Trayvon Martin’s life including the call he made to his girlfriend before being shot and killed.

Visit msnbc.com for breaking news, world news, and news about the economy

Some have picked up on criticism of Crump for having a southern accent for example prompting attorney Joe Briggs to write to his Twitter followers, “For those saying that the family needs a more polished attorney, you do not know Attorney Ben Crump. I understand.” Fellow attorney Damario Solomon-Simmons concurred saying,”Bro. Crump one of the top lawyers in America, those questioning better ask somebody!!”

While some may have never heard of the attorney before he does have a national representation. He has been a candidate for the National Bar Association’s Nation’s Best Advocate recognition an honor for distinguished attorneys under the age of 40. In 2010 he received the NBA’s “Excellence in Activism” honor.

At his heart he also very much believes in giving back to the community. Crump is a respected philanthropist. The Capitol Outlook recently chronicled his unique experience of being the “first black to lead Big Bend Relay for Life.” Crump and his law partner Daryl D. Parks have also given extensively to local schools to help fund the educational pursuits of aspiring lawyers. His biography also says, “As Board Chairman of the Legal Services of North Florida, Attorney Crump donated $1,000,000.00 to the organization’s Capital Campaign to insure that poor people could continue to have quality legal representation and access to the courts.”