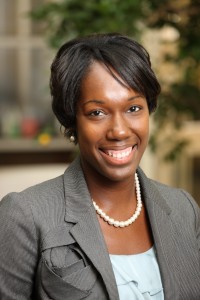 Jeree Thomas is the policy director at the Campaign for Youth Justice.

Jeree Thomas has joined the Campaign for Youth Justice in Washington, DC as the organization’s new policy director.

The campaign has as its mission to reduce the number of juveniles tried as adults in the justice system, to better educate the community about why trying youth as adults is problematic, and to push for the creation of opportunities for rehabilitation for youthful offenders.

Thomas was previously an attorney for the JustChildren Program of the Legal Aid Justice Center, which credits itself as being Virginia’s largest program devoted to legal advocacy for children. She spent nearly five years working for the Center where she represented youth that had been incarcerated or who were transitioning back into society after completing sentences. Thomas partnered with other advocates to ensure that clients received adequate legal representation which allowed for access to educational services while incarcerated, and sustained services, which would ultimately allow them to reenter society and work towards being productive adults.

“We are thrilled to have Jeree join our team, she has such great experience and has demonstrated a real commitment helping incarcerated youth,” Marcy Mistrett, Chief Executive Officer, Campaign for Youth Justice, said in a release. “I am most excited about her passion around engaging families and ensuring they are an integral part of the reform process and in ensuring that kids receive the best possible outcomes.”

The National Juvenile Justice Network also recently announced that it would be honoring Thomas with the group’s first-ever Youth Justice Emerging Leader Award.

“Jeree’s the embodiment of an emerging leader in youth justice reform,” said Sarah Bryer, who directs the National Juvenile Justice Network. “In addition to her work representing individual youth caught up in the justice system, she helped create Performing Statistics, an innovative advocacy-through-art project — the first of its kind in Virginia — in which incarcerated youth create art in support of reform. In her work with a new statewide justice reform coalition, she insisted that a former client and survivor of Virginia’s juvenile justice system serve as a community organizer –and then she mentored the young man chosen for the role so that he had the professional skills to do the job.”

Thomas is a 2008 graduate of the College of William and Mary and she went on to receive her law degree from the University of Virginia School of Law.