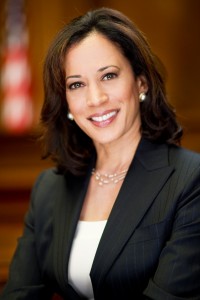 California’s Attorney General Kamala Harris is vying to become the only African-American woman in the United States Senate.

This Election Day Black Women Lead at the Polls: Eight Sistas to Watch

When the polls close tonight, Hillary Clinton may shatter the ultimate “glass ceiling” by becoming the first woman President.   This is indeed a milestone for women’s leadership, but a closer look at tonight’s history-making moment will reveal eight Black women who are poised to kick open doors that have been difficult for Black women to get through.  Despite the growing voting power, America’s 23 million Black women remain underserved and underrepresented.

Black Women’s Political Leadership by the Numbers
According to Higher Heights and the Center for American Women in Politics’ 2015 report, Status of Black Women in American Politics, Black women make up 7.4% of the U.S. population but are only 3.4% of the members of Congress.  Currently there are zero Black women serving in the United States Senate.  There has only been one Black women elected to the Senate, Carol Mosley Braun in 1992.
There are 18 Black women from 13 states serving in the 114th Congress (2015-2017), in addition, two Black women who serve as non-voting delegates representing Washington, D.C. and the U.S. Virgin Islands.   Only 35 Black women from 15 states have ever served in the U.S. Congress.

There are only three Black women who serve in state-wide executive offices and out of the 100 major cities only four Black women serve as Mayors.

In this historical moment, we must reflect on how we got here.  In 1972, Shirley Chisolm, the first Black woman to serve in Congress, became the first women and first Black person to have her name placed in nomination for the President of a major party.  Her legacy represents the possibilities that exist for Black women’s political power and leadership and paved the way for this moment.

Tonight, we have an opportunity to elect the first Black woman to the U.S. Senate in almost 20 years.  We have the chance to take Delaware off the list of states that have never sent a woman to Congress by sending their first woman and African American to represent the state,  and elect a record number of Black women to Congress.

In the states, we are poised to elect the first Black woman to the Kentucky state legislature in more than 20 years.  Additionally, we may elect a Black woman to serve as Lieutenant Governor in North Carolina. If elected she would be only the twelfth Black women to be elected independently to represent a state-wide elected office in our country’s history.

Lisa Blunt Rochester has served in the cabinets of two Delaware governors as Delaware’s first African American woman Secretary of Labor, Deputy Secretary of Health and Social Services, and State Personnel Director. A victory tonight for Blunt Rochester will make her the first woman and person of color elected statewide in Delaware’s history.

Val Demings was Orlando’s first female police chief.  Demings ran for Congress in 2012 and narrowly lost to a conservative Republican, but because of redistricting under court order, the demographics of the district have shifted creating an opportunity for Demings to join in the 115th Congress, where there could be a record number of Black women serving at one time.

Linda Coleman is the former Chair of the Wake County Board of Commissioners, a three term member of the State House of Representatives and the Director of the Office of State Personnel.    This year’s race for North Carolina’s Lieutenant Governor is a rematch of the 2012 campaign where out of 4.4 million votes cast, Coleman lost by just 7,000 votes.  A win in November will bring the total number of Black women who have been independently elected to state-wide executive office in our nation’s 240-year history to 12.

Attica Scott, is a mother, an activist, and a community leader.  Scott is a Community Coach with County Health Rankings & Roadmaps and previously a served as the District 1 representative to Louisville Metro Council.  In the May Democratic primary, Scott defeated Tom Riner, a 34-year conservative Democrat who only attracted 31 percent of the votes in the state’s 41st district. Scott, a relative underdog in the race, won with 54 percent of the votes.   If elected, Scott will be the first woman to serve in the Kentucky state legislature in 20 years.

Ilhan Omar is an experienced policy analyst, community educator and advocate. She currently serves as the Director of Policy Initiatives at Women Organizing Women, where she empowers East African women to take civic leadership roles in their community.  If elected to the State House oF Representatives she will be the first Somali-American Muslim woman ever elected in this country.

In 2005 Catherine Pugh was appointed to the Maryland General Assembly, House of Delegates, where she served for one year before running for her Senate seat in 2006.  Pugh currently serves as the Majority Leader and serves as President of the National Black Caucus of State Legislators (NBCSL).  Pugh won a hotly contested crowd field primary that included the City’s former Mayor Sheila Dixon.

Kim Foxx, most recently was the Chief of Staff for Cook County Board President Toni Preckwinkle and was an Assistant State’s Attorney for Cook County for 12 years.  Foxx won a closely watched primary over embattled incumbent State Attorney Anita Alvarez in March.  A win in November will make Foxx one of only a hand full of Black women that are State’s Attorneys in the country.

2016 and beyond is a movement building opportunity for Black women in this country and these eight women demonstrate the possibilities that exist to expand Black women’s leadership.

Kimberly Peeler-Allen is the co-founder of Higher Heights a national organization which seeks to elevate Black women’s voices to shape and advance progressive policies and politics.