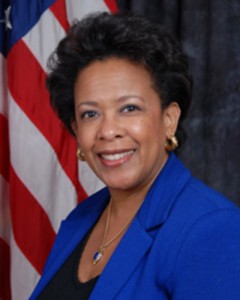 Loretta Lynch was confirmed by the U.S. Senate as the 83rd Attorney General of the United States April 23, 2015.

The United States Senate confirmed Loretta Lynch as the 83rd United States Attorney General on Thursday by a vote of 56-43, Lynch will be the first African-American woman to hold the post.

President Obama announced his intention to nominate Lynch for the job on November 8, 2014. The Senate officially received the nomination on January 7, 2015 and the nomination was immediately referred to the U.S. Senate’s Committee on the Judiciary.

Lynch’s confirmation hearings were then held on January 28th and 29th.

Lynch’s final confirmation had been held up by the Republican-controlled Senate; while they considered a human-trafficking bill. A move, which drew extensive criticism by some Democratic lawmakers and groups who support Ms. Lynch.

“For almost two months, I have been returning to the Senate floor to urge the Majority Leader to schedule the confirmation vote for our next Attorney General.  Yesterday afternoon we were finally able to get an agreement that was long overdue,” said Leahy. “We all know that Loretta Lynch is eminently qualified to be our next Attorney General.  She should not have been delayed for so many months by the Senate majority.”

Some Republican Senators including Sen. Ted Cruz (R-TX) maintained their opposition to her confirmation until the very end.

“Bringing in a new Attorney General should be turning a positive page in this country, but unfortunately the answers that Ms. Lynch gave at the confirmation hearing, in my opinion render her unsuitable for confirmation as Attorney General of the United States,” Cruz said in remarks on the Senate floor Thursday.

Lynch has twice served as the United States Attorney for the Eastern District of New York.

“Today, the Senate finally confirmed Loretta Lynch to be America’s next Attorney General – and America will be better off for it.  Loretta has spent her life fighting for the fair and equal justice that is the foundation of our democracy.  As head of the Justice Department, she will oversee a vast portfolio of cases, including counterterrorism and voting rights; public corruption and white-collar crime; judicial recommendations and policy reviews – all of which matter to the lives of every American, and shape the story of our country.  She will bring to bear her experience as a tough, independent, and well-respected prosecutor on key, bipartisan priorities like criminal justice reform.  And she will build on our progress in combatting newer threats like cybercrime.  Loretta’s confirmation ensures that we are better positioned to keep our communities safe, keep our nation secure, and ensure that every American experiences justice under the law.”

It was not immediately clear when she would be sworn into office. She succeeds Eric H. Holder, Jr. the first African-American man to be Attorney General.