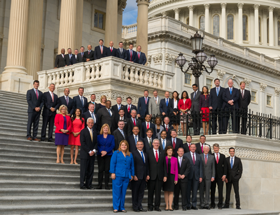 The newly elected members of Congress who were elected in November will take their seats Tuesday, January 3.

Several African-Americans will take seats in Congress when the newly elected members are sworn in Tuesday, January 3, 2017.

Dwight Evans (D-PA) was elected to the House at the end of the last Congress to replace former Congressman Chaka Fattah who resigned after being convicted on corruption charges.

Three of the new members are attorneys Kamala Harris who is the outgoing Attorney General of California, Anthony Brown who practiced law before becoming Lieutenant Governor of Maryland, and Donald McEachin who started his own law firm in his home state of Virginia.